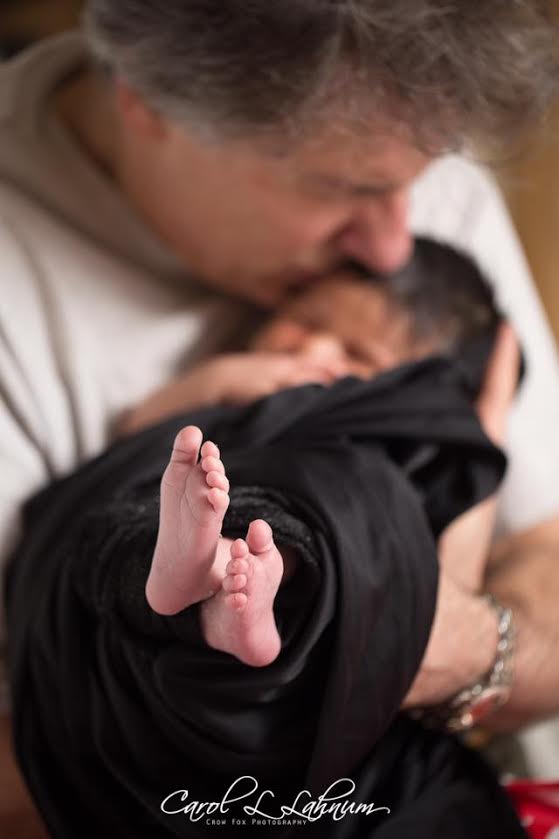 Uri came to this world the usual way via natural birth. Born at Juneau Birth Center with very caring midwives, Uri had no complications. Stephanie, his mother, did everything she was told and made herself as comfortable as she could during the delivery. We came to the Birth Center Saturday night after 5 pm and Uri was born at 10:01 pm January 28, 2017. He weighed in at 7 1/2 pounds and was 21 1/2 inches long. A healthy and big baby.

After the delivery, Uri seemed content. He looked around the room as to say “so this is what it’s like here”. He was wiped down and had amniotic fluid taken out of his mouth by the midwife, Johanna. He had to replace the fluid in his lungs with air. In the process he never cried. Then he was promptly given to Stephanie, who took him in her arms on her chest. Uri just kept looking around.

But it was not quite over yet. He was still attached with an umbilical cord to the placenta. I, his Papa, had the honor to cut the cord, which he became free from his capsule. That capsule was his life inside his mother for nine months and a week. He grew and knew that life for its full term. He left that capsule when he was ready. He was not forced out from outside influences. He did what he needed to be done. He loved being inside the capsule because it was a sense of security. Moreover, he wanted to make sure he was getting all the care from his mother that he can get. And when he was content, it was time to leave the home, to make another home, a home outside his mother’s womb into her arms. He knew he will be taken care of by his mother as he knew he was taken care of when he was inside her living in the capsule.

When I look at him I often wonder what it was like when I was born. What did my father thought about me? How did Mom manage to take care of me? I can only guess what went on in those days. Yet, a first born means so much to new parents, no matter what era it happens to be. The mother is very concerned of her first child. Often over protects and reacts if something goes wrong, especially if it is a little fix, like a diaper is full or the baby is hungry. And the father has to change his life style a bit. He cannot do what he wants to do. There are sacrifices involved, not only for his first born, but also for his wife who has to stay home to nurse the baby, and rest and heal from delivering their son. When I look at Uri into his eyes, I see a new life. And yet, I look around me and I see people who were in the same position as Little Uri is now. But these people have put much time behind them.

This post is about the adventure, the audacious, of Uri and his Papa. Uri came into my life when I am old enough to have grandchildren, as most of my high school classmates have now. Unlike them I wanted to see what the world is about first before having someone whom I am responsible for come into this world when I’m not ready for them. Like every new parent, I want Uri to have a better life than what I had growing up. There are some things I can control, like my vocation and where to live, where Uri goes to school and what sports he participates; but there are things I cannot control, like government — city, state or federal — they do what they want to do without consent of others, so it seems.

Even with my past with my own father, our relationship was not the best. But I want to make a wonderful relationship with Uri. Still, I will have some issues that will come up from my past that I will have to deal with when having this journey with Uri. That’s when I have to jump over the shadows of the relationship I had with my father and create a new shadow for Uri when he becomes a father one day. Fatherhood is not an easy journey; yet, it is the most rewarded quest of any man who can say they are proud of their son’s accomplishments. The best rewards come from the most difficult challenges.