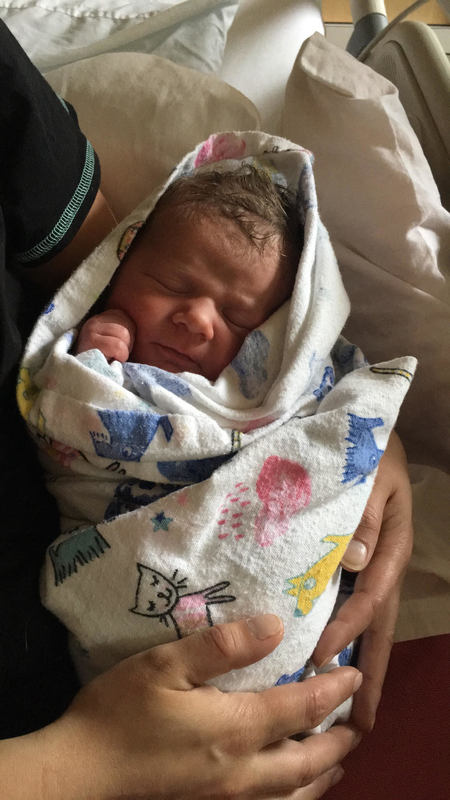 I chose to have my fourth baby at the birth center rather than the hospital like the other three, because they offered more maternal control over prenatal care and delivery than other options. Since this was my fourth child, I felt I knew my body well enough to choose my own level of care.

My experience with the birth center was perfect. The midwives trusted my instincts and honored my choices. I was all set to go right around my due date which is the norm with my babies, and have a nice, quick labor and go home.

But alas, it was not to be. You would think after having 3 other babies I would realize when my water breaks, but you know, when they say every pregnancy is different, it’s the actual truth. A few days before I reached 38 weeks, I noticed what could only be described as a drip, and I paid no attention for the first day since pregnancy is weird, and tends toward a lot of irritating, but unimportant sensations. I carried on that way for another day until the drip joined company with a low, dull ache. I had an appointment scheduled for the following afternoon, and was trying to wait it out, but when I realized I had spent the entire morning frantically planning, cleaning, and acting like I was about to have this baby, I decided I had better go in and check. Often, I find my body doing things my mind hasn’t caught up to yet.

So I called Johanna and met her at the Birth Center where she check for amniotic fluid. The test was positive and she said that unfortunately, since I had tested positive for group B strep, and I first noticed the drip over 48 hours previous, I could not have the baby at the birth center. I was disappointed of course, and a little nervous at the thought of another hospital birth because I hadn’t always had a positive experiences there. But Johanna said she would be there with me, and to meet her at Bartlett after I had packet a bag.

In triage, the nurse confirmed my water had broken, (was seeping, in this case) and the test was a very faint positive. The doctor said we had to have 2 rounds of antibiotics before they induced because of the group B, and it would take some time. Johanna left for a while to take care of some things and get some rest before things got going because it was already evening.

They started Pitocin off slow, and I was grateful for that. I had a few contractions and they were steadily increasing when I had my husband call Johanna back , around maybe 11pm. I’m not really sure about the exact timeframe. The pains were manageable, so I cavalierly declined any pain medication. Funny thing about me and labor – I never ask for an epidural until I’m convinced I’m about to die, and by then it’s always too late. By the time anything gets organized enough, the baby is out.

I remember getting into the tub to move around and get my body t0 start contracting on it’s own, because I’m not a huge fan of Pitocin (who is?). The nurse had given me little tea lights all around the tub, so I was on my hands and knees in the darkened bathroom, still hooked to the broke for real, and I felt a huge gush. I got out of the tub and labored for a while longer on the birthing ball.

My contractions kicked up several notches shortly after that, and at some point, probably around midnight, the doctor did a cervical check. I was only at 4 cm. I remember being so disappointed with that said little number! I was around 2cm when I walked in the door, and probably for weeks prior, so I really was hoping for a short labor this time. It was already been about 5 hours by then from the first little pains. So I moaned and groaned about that for a little while, and then struggled through increasingly painful contractions.

They had taken me off pitocin sometime around then, and I decided to get back in the tub to try to be alone for a little while and relax a bit. That’s when the real fun started. Shortly after I got in the tub I had the hardest contractions yet, and there seemed to be no beginning or ent to them. Every time one would come closer to the end of the last I got a little mad and I remember yelling, “oh come ON!” I was convinced I would be in that tub for the next day or so with hideous back to back contractions because my body obviously that that 2cm every 5 hours was a perfectly acceptable rate of labor.  That’s when I gave up and finally asked for an epidural.

I had to use the bathroom while trying to get out of the tub and back to bed for said epidural, and I realized that my bodu would not stop pushing, even when I tried not to. This was only about 40 minutes since my last cervical check, and I wasn’t even trying to push a while baby out 4cm, so I tried to stop it. Johanna helped me back to bed to see if we could get an epidural started. Someone, I have no idea who, at this pointed, checked my cervix again to see if an epidural was even possible. But (and I should have known better) it was not because there was the baby sunny side up and waiting for me to get down to business. Thinking back, I realized I could have had the poor kiddo on the toilet. Now that would be quite the birth story. 🙂

Somehow, when you know the end is in sight the pain becomes more bearable and suddenly the contractions weren’t nearly as awful. However, I’ve given birth to an upside down baby before, and that little bit more circumference makes for some hard work to get out. Guess they don’t call it labor for nothing, right? I don’t know how long it took, but the little guy finally slithered out, helped along by an unsuspecting ER doctor who got enlisted in the absence of my own doctor. Dr Newbury must have missed it by just minutes though, because he was there soon after.

All was well with the baby, who was health almost 8 pounds and had all his bits and pieces in the right spots. We were discharged less than 48 hours after admittance, and headed home to let the new guy get used to his brothers.

I’ve had four birth experiences, and this was the most dramatic. While I am disappointed that I couldn’t have my baby at the birth center, the midwives continued services through birth and postpartum, and I felt so much support from both Johanna and the other midwives, as well as Dr. Newbury, I have never been so well taken care of.