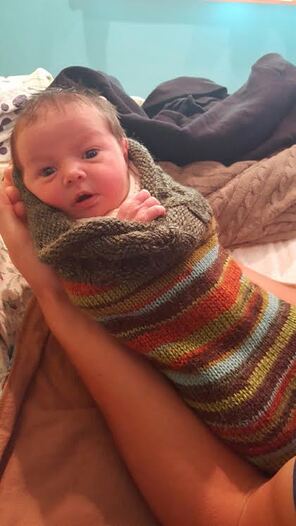 My two children were such incredibly different birth experiences.

My daughter took her sweet time. I had some mild contractions the first day. We went walking and even out to the “last supper” for Thai food. I had to concentrate a bit every 10 minutes, but that was really a breeze. I called Johanna around 8pm to let her know things were starting. From then it was another 33 hours until we met Claire. I tried to sleep but around 2am it was too intense for me to relax. I had to be on all fours for every contraction. I got into the shower. I spent the whole next day laboring at home mostly in the shower. My husband, Elm, brought me snacks and made all the phone calls.

We met Johanna at the birth center around 6pm. She checked me as soon as we arrived. Only 4cm. My progress was slow. The pain was all in my back. I had had very little sleep. I attempted using the color technique of hypnobirthing, but even that was harder than expected. I tried the rocking chair, the birthing stool, backwards on the toilet, walking around outside, I just wanted back in the tub. Johanna had such beautiful patience with us. My mom and Elm were comforting me in every way they knew how.

Finally I was lying on my side on the bed half asleep, so exhausted.

A huge contraction hit me and I felt my entire body tense up and I couldn’t hold back a groan nor some bearing down. I felt fluid releasing. Not a gush, but not a trickle. I remember thinking “I don’t think I just peed”. Everyone jumped up. Johanna asked me if I had just pushed. I nodded and said “I thought my water just broke”. She checked. Sure enough. She called in Madi for reinforcement.

I finally got back in the tub. This time for the last time. Hurray for stage two!

So pushing…. No real choice in that matter. My body took over. I made sounds I didn’t know I was capable of. Exhaustion blurred with the pain to make its own hypnotic state. I was dozing off for the few seconds between contractions. Elm said he was holding my head above water. My sister was near the tub to help catch the baby.

At one point I felt down below and there was what felt like a water balloon. And that’s when I learned that your waters can actually break twice. Johanna ended up breaking the bag for me. Thank God.

A huge gush of vernix and amniotic fluid mixed into the bath water. I held my belly one last time and said “come on baby”. After another contraction, baby’s heart rate dropped a bit. Madi held an oxygen mask to my face which brought the rate back up. Here comes a head. I heard Johanna say the cord was around the neck which she solved with a quick slip of a finger. A couple more pushes and out she was. I had been pushing for about an hour and a half.

A huge surge of relief flooded over me. All of a sudden there was this little girl in my arms. She stared around with huge dark eyes. She had tons of dark hair. I was hyperventilating completely in shock. I had no idea what she would look like or even if she was a she. Johanna finally brought me back down to earth so she could get me back on the bed to address the bleeding and afterbirth. Apparently my little girl had come out with a nuchal arm (another thing I didn’t know about) and tore me pretty good. Before that could really be addressed though, I had to deliver the placenta. Madi brought over the horse needle full of Pitocin and got me on both lateral thighs. Somehow with my renewed energy I now felt pain very acutely…..My God.

The next few hours were a blur of bliss. Johanna stitched me up and helped Claire latch on. Family members rotated through to meet her. Claire had been born around 3:30am on Fathers day. Johanna said we may as well go to sleep and we could go home later that morning. I almost didn’t want to. Somehow I was glad yet sad that her birth was already over. 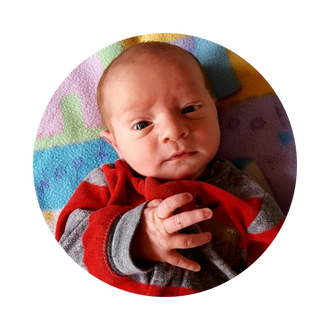 Two years later we figured it was time for Claire to have a sibling. This time was completely different. I had no extra energy. I could barely walk. I was a true waddler. I had been having Braxton Hicks since week 19. Heartburn was in full force. Still I felt it was all a small price to pay to build a human.

The day labor started I wasn’t so sure. It was a week early. I had some spotting in the morning. In the afternoon my contractions became pretty intense.

They were very irregular however and I had been having some very intense practice contractions anyway. I kept thinking maybe something is happening but didn’t want to get my hopes up. I spent the day with Claire, letting her do things she wasn’t normally allowed to do like watch cartoons when it was a sunny afternoon. I was actually afraid to go outside with her though because if she bolted I literally don’t think I could’ve caught her. She may be short, but she was much faster than a very pregnant me.

Elm was outside all day with a friend falling trees and splitting firewood. I told him my suspicions around 3pm but reassured him that if this was anything like Claire’s labor we had plenty of time. This was not to be.

Though still irregular, my contractions grew very intense. The pain traveled down my legs this time. A sensation I never had with Claire. I had to hold on to something, hunch over, and rock my hips. Any physical activity would bring one on. My defining moment was when a huge contraction hit me right as I was lifting my potty training toddler on to the toilet. I let out a big groan and just about collapsed while trying to balance her. She asked “mom, whatcha doin?”, “The baby wants to come out and meet you” I told her when I could talk again.

After resting on my side for a bit my husband convinced me it was time to call. It was a little after 6pm. I called Madi. I said I figured it could be a while but wanted to give her fair warning.

She said I wasn’t the first woman to call that evening and she would head to the birth center and prep things.

Elm made some dinner which I had every intention of eating. I went to take a bite and was immediately hit with another one. Elm put pressure on my lower back and relieved some of the pain. Elm said “That’s it, were going now”. I still wasn’t sure if it was time. I really wanted to eat, but there was no arguing with him. He got Claire and all our stuff to the car. He called my sister who had just barely arrived on the ferry. He called Madi back who was already at the birth center with another laboring woman. Meanwhile I got myself to the car. A journey up an uphill driveway that felt like Everest. This was around 6:45pm.

It was a 20 minute drive. There are very few appropriate words that can describe contractions while sitting in a car so I won’t try.

When we arrived, Elm gave Claire to my sister who was waiting for us. He also grabbed all the stuff we thought we may need.

Meanwhile I had a contraction getting out of the car, another at the door of the clinic, and another as soon as I made it to the room. I had been using the waves washing over me technique of coping which so far had worked well. Madi checked me immediately. Holy 8cm! She asked if I wanted to get into the tub. I said I did as long as it wouldn’t slow things down. She said “Your at 8, I don’t think anything’s going to slow down.” I was thrilled and immediately stripped off the rest of my clothes. Tessa, Madi, and Jess cycled through my room and the girl next door. Jess went over my chart and started taking over vitals. I felt like I wanted to push but my waters hadn’t broken yet. Jess told me I could attempt to break them myself or have them broken. After one attempt myself I asked them to do it. Madi made quick work with a long hook during an intense contraction. That was at 8pm.

I…felt…everything! The burning ring of fire as my baby emerged. My wave coping technique wasn’t working now. I was breathing too fast. I kept thinking no storm could make waves hit this fast! When its head emerged it felt like forever before the next contraction. Too long. They had me stand to get its head out of the water. Someone readied a tiny ambu mask. Then at 8:09, here he came. Slightly blue but he wriggled and finally let out a cry. I was in shock again. He had very little hair except on his butt and shoulders. His nose belonged to a grown man. He became pink quickly. Owen was a beautiful!

Such incredibly different births. Both amazingly powerful. I would relive both if I could. The anticipation, the support of every midwife and family member, the euphoric love, and relief in the end. All of it makes the physical agony of childbirth pale in comparison. It is this incentive that gives women the strength to go through childbirth over and over. Not the myth that hormones make you forget the pain.

I loved my pregnancies, my births, my two wild babies, and my midwives. The women who empowered me to embrace it all.